Anemia is most prevalent in low-resource settings, where it goes undetected until becomes severe. Despite the implementation of several initiatives by the Government, India has made only 13 percent progress in eradicating anemia (Global Nutrition Report, 2017).1

Periodic screening and early diagnosis are the keys to controlling anemia. The conventional Hb tests involve invasive methods with the requirement of hygienic infrastructure and skilled healthcare providers. But with the huge gap in basic health infrastructure, rural community members have very little provision for diagnostic facilities. In Kenduapal Village of PaschimMedinipur, West Bengal shows 88 percent of reproductive-age women have undergone Hb tests for the first time in their lives. They were not aware, if they are prone to a high-risk pregnancy or not. It also indicates the behavioral risk factor which contributes to delay in Anemia detection.

According to WHO recommendation, a non-invasive hemoglobin device is proved to be a good addition. Non-invasive point of care devices can eliminate the potential contamination, bio-hazard handling and can even enable frontline health workers with basic education to perform Hb Test.2 Joseph et al. (2016) also affirm that non-invasive methods are safer than invasive methods and improve patient satisfaction.3Bandyopadhyay S., Neogi, and John D. et al. (2019) further contributed to the fact that as most of the anaemia screening happen in outreach settings, where provision for laboratory support seems difficult, the device ought to be tested in field settings with health workers, non-invasive diagnostic provides viable accuracy.4

iKure’s non-invasive anemia screening initiative started with the vision of reaching out to the last mile community. Members are chosen from the community and are technologically and clinically trained to use them for screening patients. The community health workers are further mobilized to collect other health parameters important to understand the risk of the patients. Instead of using a paper-based format, CHWs use WHIMS that is able to collect patients’ vitals on a cloud server. The data available on the cloud are further sent to medical professionals for referral and counseling.

However, while iron deficiency is the main cause, micronutrient deficiency, inflammations and inherited disorders also contribute to anemia. A baseline report of mother and child health camps reveals that 64% of pregnant women were anemic and 30% with milder anemia. Nutritional experts suggested that a large section of the community are found to be anemic because of women’s ‘‘non-compliance/non-adherence” to the consequences of the anemia and fear and anxiety towards invasive blood drawing.5 Also, women’s consumption rate of IFA supplements are low since they complain of suffering from gastrointestinal upset. Altering such behavior requires regular counselling. iKure’s CHWs are deployed to spread awareness and bring positive health-seeking behavior among pregnant women, new mothers, and adolescent girls. 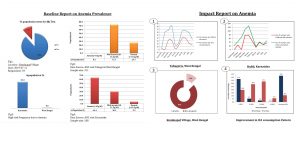 iKure’s non-invasive anemia testing initiative has been rolled out successfully in school health program and mother and child health camps catchment areas. Within few months, it has gained significant traction such as:

While priorities and approaches may differ according to geographic settings, but strategies to curb anemia remain the same. At iKure, we believe in bringing the desired change soon in India’s rural villages.